When you look back on your life, do feel like you lived it to the fullest or did you waste time waiting for the right moment to do what you really wanted? When you look at the world around you, do see unending competition with yourself and others, or the possibility of harmonious love? These are the kinds of questions you start to ponder when you really dig into the psychedelic blues rock of Steve Miller Band’s 1976 release of their ninth studio album, Fly Like An Eagle. These are also the kind of queries that swirl around the mind of a comedian with as long and unique a career as Wayne Federman. Combining creative musicality with hilarious self-deprecation, Wayne has been a ubiquitous but subtle force in the comedy world for decades, with credits like HBO’s The Larry Sanders Show, Curb Your Enthusiasm and Crashing to name just a few.

Fantastic Negrito is an Oakland, California-based artist who blends blues and R&B with big hooks. He always admired blues-based artists like Steve Miller, who we learned dropped the ‘Blues’ from his band’s name just before ‘Fly Like An Eagle’. Fantastic Negrito won a Grammy in 2016 for his album The Last Days Of Oakland for best contemporary blues album. His latest is ‘Please Don’t Be Dead’. Both are available for your listening pleasure on Spotify. Released in May of 1976 and produced by Steve Miller this is the ninth studio album by the American psychedelic, space, blues, jam, rock group, the Steve Miller Band.

Some people call him the space cowboy, some call him the gangster of love, some even call him Maurice – or the joker – but he was born Steven Haworth Miller in Milwaukee, Wisconsin in 1943.

And fortunately, Steve Miller had two Jazz-enthusiasts for parents.

His mother Bertha was a Jazz singer and his father George “Sonny” Miller was a doctor and amateur recording engineer.

In fact, Steve’s parents were best man and maid of honor at Les’ and Mary’s wedding and Les was Steve’s godfather.

Les Paul showed the four or five-year-old Steve some guitar chords and later when Steve’s father played Les a recording of his six-year-old son banging away on the guitar he encouraged him to let the child continue with his interest in the guitar saying, “Perhaps he will be something one day.”

Soon after, the Miller family relocated to Dallas, Texas. Steve’s father frequently had over more famous musicians to record and hang out with, including Blues great T-Bone Walker, who taught Steve how to play guitar with his teeth and behind his head, and legendary Jazz bassist and composer Charles Mingus.

In elementary school Steve put together a band after teaching his older brother Buddy to play bass and another school friend to play guitar, future musical star Boz Scaggs who you Fleecers will remember from when Kevin Nealon and I reviewed his debut album on The 500.

Miller went back to Wisconsin for college where he formed another group with Boz Scaggs and keyboardist Ben Sidran who would go on to become a famous producer and musician.

After transferring to the University of Copenhagen in Denmark Miller dropped out just six credited hours shy of his degree in literature so he could pursue playing blues guitar in Chicago.

When he told his parents of his plans his dad was shocked but his mother told him to go for it.

While in Chicago he got to jam and become friends with Blues legends like Howlin’ Wolf, Buddy Guy, and Muddy Waters as well as with fellow student of Chicago Blues, singer and harmonica player Paul Butterfield, who y’all remember from The 500 episode about his band’s debut album with the voice of the Dodgers Charlie Steiner.

And it was with Paul Butterfield’s original keyboardist Barry Goldberg that Miller formed the Goldberg-Miller Blues Band.

But after one single, a residency in New York, and another unsuccessful attempt at college in Austin, Miller borrowed his dad’s VW van and moved to San Francisco where he fell in love with the exploding psychedelic scene.

And that’s where he put together the Steve Miller Blues Band which signed to Capitol Records in 1967 and shortened their name – dropping the ‘blues’ before their first album was released in 1968.

Many members came and went and the band had some success but by the ninth album there were only two other members besides Miller, Gary Mallabar on drums and Lonnie Turner on bass guitar.

Their previous record, 1973’s “The Joker” was a huge hit, and Miller took the money and ran… back to his home in the Pacific Northwest where he built his own recording studio.  He took a year off from touring to write and record.

In that home studio between ‘75 and ‘76, the band recorded their most commercial and accessible original songs.

While some fans thought they sold out by making such a slickly produced album there’s no denying that it struck the right chord when it became a mega-hit and eventually went quadruple-platinum, instantly turning the Steve Miller Band into an arena rock act for years.

Even Rolling Stone Magazine called it the best LP of 1976, beating out classics like Bob Seger’s “Night Moves” and Boston’s killer debut album. 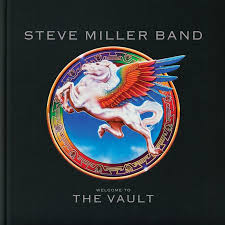